The Importance of the Dhama 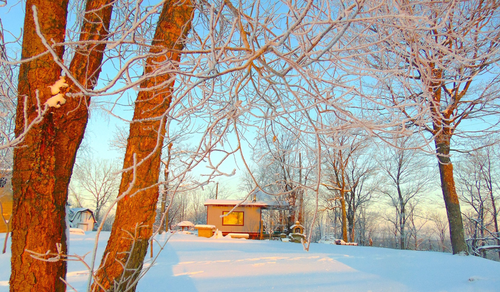 For Gaudiya Vaisnavas, “back to home” means specifically Vrindavan or Navadwip Dhama (not Vaikuntha, Dwarka, Ayodya, or even Mathura). Prema-sankirtan, which descends from Goloka Vrindavan, is both the means and the goal of entrance into Vraja. Prema-sankirtan is the continuous chanting of the Holy Names of Sri Sri Radha and Krishna:

For the development of prema-bhakti, the importance of the dhama here on this Earth planet cannot be over-emphasized. In fact, vraja-bhakti is as unique to this earthly mortal realm as it is distinct in Goloka Vrindavan. Even Lord Chaitanya Mahaprabhu, the most magnanimous appearance of Lord Krishna Who distributed prema (love of God) through the chanting of the Holy Name, did not extend His movement beyond the Earth.

After maturing in sadhana, a devotee comes to the Earth planet within whatever universe Krishna’s bhauma lila is currently manifest. In the association of Brijabasis in Bhauma Vrindavan, the devotee attains the qualification for returning to Krishna’s abode. Thus birth on Earth is a prerequisite for developing prema-bhakti and establishing a connection to Gokula Vrindavan (Krishna’s homeland in the spiritual sky).

In the Vedic scriptures, there are significant references to Bhauma Vrindavan spanning all four yugas. These references further attest to the import, quality, and character of the holy dham on this Earth planet.

The earliest Puranic account of Bhauma Vrindavan is the conversation between Lord Varaha and His consort Mother Earth. The Puranas report that the forests of Vrindavan remained unaffected even as the Earth was plunged into the Garbhodaka Ocean.

This reference attests to the import, quality, and character of the Bhauma Vrindavan and Her expansions on this Earth planet. Furthermore, it nourishes our desire to return to our eternal homeland, Krishna’s eternal Abode of Vraja, through continuous chanting of His Holy Names:

Also, the child Dhruva, the great-grandson of Brahma, took shelter of Vraja dham on Earth while performing tapasya for six months as instructed by his guru Narada Muni. Srimad Bhagavatam 4.8.62 characterizes Madhuvan in Vraja as being "always imprinted with the lotus footprints of Lord Krishna and which is therefore especially auspicious."

Scriptural references to Bhauma Vrindavan attest to the truth that a devotee attains the qualification for returning to Gokula Vrindavan (Krishna’s abode in the spiritual sky) only by taking birth on Earth and associating with Brijabasis in Bhauma Vrindavan or Her expansions. This is one reason why the Gaudiya Vaisnava sampradaya places such great emphasis on dham seva (service to Krishna’s Abode).

The Harivamsa Purana describes how Haryasva, the son-in-law of the Madhu demon, constructed a palace at Govardhan. This is the earliest Puranic description of a residence in Bhauma Vrindavan (Krishna's Abode on the Earth planet).

Much later, Maharaja Mandhata, the king of Mathura, gave his 50 daughters to the sage Saubhar Muni who was residing within the waters of Jamuna. According to local tradition, Maharaja Mandhata also had a palace at the foot of Govardhan on the shore of Manasa Ganga.

Maharaja Mandhata's son, Ambarish Maharaja, performed austerities at Madhuvan. Although it is not specifically mentioned, evidence indicates that Ambarish Maharaja's residence was in Mathura.

In describing Maharaja Ambarish's devotions, Srimad Bhagavatam 9.4.18-20 states that Maharaja Ambarish "engaged his eyes in seeing the Deity of Krishna, Krishna’s temples and Krishna’s places like Mathurā and Vṛndāvana, . . . " This description indicates that the lila-sthans in Bhauma Vrindavan were already developed during Ambarish Maharaja's reign.

For the development of prema-bhakti, the importance of the Bhauma Vrindavan (the dhama here on this Earth planet) cannot be over-emphasized. This is one reason why the Gaudiya Vaisnava sampradaya places such great emphasis on dham seva (service to Krishna's Abode). Srila Prabhupada's instructions to create New Vrindavan as a replica (expansion) of Bhauma Vrindavan exemplifies this principle.

In the purport to Bhagavad Gita 1.1, Srila Prabhupada writes that any place where religious rituals are performed is a holy place. Holy places have a special potency and influence the course of events and world history. This potency can be used for whatever purpose we choose depending upon our consciousness.

The demon Ravana resided in the region of Vraja as he performed tapasya with the goal of conquering the universe. By the potency of the dham, Ravana was empowered to conquer the three worlds. After killing Ravana, Lord Rama sent His brother Satrughna to restore peace in the realm of Vraja and to kill Lavanasura, the demon king of Mathura, who was a nephew of Ravana.

The Gaudiya Vaisnavas realize the potency pf Bhauma Vrindavan and its necessity for the development of prema-bhakti. This is one reason why our acharyas place special emphasis on dham seva (service to Krishna's Abode) on Earth. This includes recovering, maintaining, and re-creating the lila-sthans of Krishna's eternal pastimes.

After leaving Vrindavan, Krishna relocated to Mathura where He resided for 25 years ostensibly to protect Vrindavan from the demon allies of Kamsa who came in relentless waves to attack Krishna and His associates in retaliation for Kamsa's death. Thus Lord Krishna utilized the fortifications and ksatriyas available in Mathura to defeat Jarasanda's numerous attacks.

Finally, when Kamsa's father-in-law Jarasanda joined forces with Kalayavana to simultaneously attack Mathura from different directions, Krishna relocated the entire population of Mathura to the fortified island of Dwarka as the Mathura-vasis slept. Newcomers then re-populated Mathura and lived under the protection of Maharaja Yudhisthira until Arjuna brought news from Dwarka that Krishna had concluded his pastimes in this world.

Upon receipt of that news, the Pandavas entrusted protection of the world to Emperor Pariksit, and they posted Krishna’s great-grandson Vajra as king of Mathura. The Pandavas then departed for the north, treading a path followed by their ancestors from which they would never return.
Thus a new era of world history began with the departure of Krishna and His associates, the takeover by Kali, and the disappearance of the lila-sthans of Krishna’s eternal pastimes from mortal vision.

Before departing for the northern regions, Arjuna entrusted Krishna’s queens (who were among the surviving members of the Yadu dynasty) into the care of King Vajra who escorted them from Indraprashta to Mathura. It was in Mathura that Emperor Pariksit, during a tour of his empire, heard from Vajra that although Mathura was thriving, the most sacred land of Vraja was deserted.

For Emperor Pariksit, it was unacceptable that Sri Krishna's Own Abode be left as a wasteland. In response, the emperor summoned Sandilya Rishi (Nanda Maharajaj's guru and one of the only remaining witnesses to the previous glory of Vraja). Sandilya Rishi impressed upon the emperor and king that restoring Krishna’s holy dham to her proper dignity and splendor (dham seva) was their foremost duty and service to the Earth, the Lord, and their subjects.

Maharaja Pariksit was elated to hear this instruction from Sandilya Rishi, considering it to be an order descending from Krishna Himself.

In a mood reminiscent of our forefathers Emperor Pariksit and King Vajra, the Gaudiya Vaisnavas realize the potency of Bhauma Vrindavan (the dhama here on this Earth planet) and its necessity for the development of prema-bhakti. Thus the the disappearance of the lila-sthans of Krishna’s eternal pastimes from mortal vision is an intolerable condition to the Gaudiya acharyas who place a strong emphasis on recovering, maintaining, and re-creating the lila-sthans of of Krishna’s eternal pastimes.

Srila Prabhupada instructed his disciples to create a replica (expansion) of Bhauma Vrindavan in the West, specifically naming Govardhan, Radha kunda, Syama kunda, and the seven major temples of Vrindavan.

Why did Srila Prabhupada specifically name these lila-sthans? Because the sweetest and most charming characteristics of Vraja rasa assume tangible form in the patterns, arches, domes, lattices, and decorations of Vrindavan temples. The different kundas on Govardhana Hill carry the diverse flavors of the distilled essences of the love of Radha, Krsna, and Their associates.

Nanda Maharaja’s guru, Sandilya Muni, gave clear instructions to Emperor Pariksit and King Vajra regarding the recovery, maintenance, and re-creation of the lila-sthans of Krishna’s eternal pastimes (dham seva). These instructions are most relevant to the followers of Srila Prabhupada who desire to assist His Divine Grace in creating a replica (expansion) of Bhauma Vrindavan in the West.

Sandilya Muni first explained how, after killing Dantavakra, Krishna had returned to Vraja to conclude His prakata lila there. Sandilya Muni explained that Krishna had returned to Dwarka in His Vasudeva form; while simultaneously He escorted the remaining Brijabasis back to Goloka in one aprakata form; and He remained in Vraja to enjoy his unmanifest pastimes with His eternal associates in another aprakata form.

Sandilya Muni further explained that as all the Brijabasis (including the cows, deer, birds, and other living entities) became unmanifest to mortal vision, what was left of Vraja appeared to be a wasteland with no recognizable features other than Govardhan Hill and Jamuna.

Sandilya Muni emphasized to both the king and the emperor that their eminent duty was to restore the dham to some semblance of the place of Krishna’s pastimes (dham seva). This was for the welfare of mankind, the pleasure of the Lord, service to the earth, and service to the dham. He blessed them that such service would assure them of the blessings of the holy dham which is the realm of divine existence, knowledge, and bliss.

Emperor Pariksit was elated to receive what he knew to be Krishna’s order coming through Sandilya Muni. He sent architects, engineers, artisans, craftsmen, and masons from Indraprastha to Mathura to perform dham seva.

Meanwhile, Sandilya Muni guided King Vajra in identifying the pastimes places of Vraja. King Vajra then engaged the men sent by the emperor in resurrecting those lila-sthans where he established villages and settlements; excavated kundas and lakes; constructed temples; installed Deities; and invited good people from surrounding regions to take up residence in Vraja.

This is the first historical occurrence of the drsyamana dham (the dham which has become unmanifest after Krishna’s departure from it) being restored to a likeness of the prakat (manifest) dham. This offers a significant precedent of dham seva for those who desire to fulfill Srila Prabhupada’s instruction to manifest the lila-sthans of Vraja in New Vrindaban.