Lessons from the Leaves 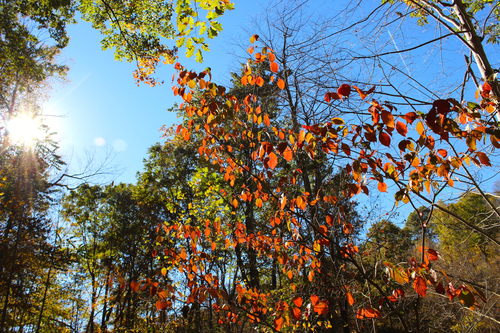 My grandfather was instrumental in the attempt to save the American chestnut. In my first conservation service (at the age of 5), I gathered the chestnuts from that survivor tree so that my grandfather could send them to all the universities around the country who were studying how to create a blight-free chestnut.

Having the association of my grandfather who was expert in all the skills relating to tree conservation – planting, grafting, pollinating, cultivating, etc. – imparted a strong impression of how nature sustains you if you work with her. Perceiving the lessons that nature offered daily gave me a strong conviction of the presence of God.

This morning during my japa walk, as the sun rose to illumine the exquisite foliage of the autumn season, I heard the voice of the dhama as a breeze rustled through the leaves. The breeze seemed to articulate another lesson from nature.

That lesson is that the dominant green color of the summer foliage, created by the rise of chlorophyll, which is a necessary ingredient for all plants, signifies the all-pervading similarities within the plant kingdom. This similarity confirms the oneness of the Lord’s Creation; and it confirms the truth that each individual jiva shares, to varying degrees, the same spiritual nature of sac-cit-ananda as our Creator.

With the advent of autumn, the green chlorophyll withdraws and what becomes dominant is the unique colors and patterns of each individual leaf, plant, creeper, and tree. Thus the beauty of the autumn season lies within the variegatedness of the living entities. Unless and until the specific differences between the individual jivas are acknowledged, and the differences between the jivas and the Lord are recognized, we cannot properly accept Lord Damodara’s invitation during the month of Kartik to celebrate the ties of spiritual affection.

And without the loving relationships that are possible only when we accept our own uniqueness and the uniqueness of others, there is no satisfaction for Krishna, no fulfillment for the jivas, and no purpose for creation.

The greenness comes first to establish the common source of all life and to bring us to an understanding that all the living entities belong to one family with a common Father and Mother. When we become concerned with the welfare of the family and become part of something greater than ourselves, then a spirit of true brotherhood and sisterhood dominates our consciousness.

Without this understating, the differences may lead to conflict, competition, and the comparison game.

Thus as the earth goddess Bhumi Devi adorns herself in garments embellished with autumn foliage, those attuned to the rhythms of the earth perceive a spiritual truth displayed in her seasonal transition. That truth is Lord Caitanya’s message of acintyabhedabheda- tatva, the spiritual truth by which He reconciles the four Vaisnava sampradayas.

Lord Caitanya offers a precious service to humanity by unifying, synthesizing, and harmonizing the different perspectives offered by the four Vaisnava sampradayas. He does this in a profound yet practical philosophy called acintya-bhedabheda-tatva which means that God and the jivas are "simultaneously and inconceivably one and different."

Srila Prabhupada presents the philosophy of acintya-bhedaheda-tatva in a manner that is accessible to the common person. Thus all of Srila Prabhupada's sincere disciples and followers can understand and apply this doctrine in their own lives.