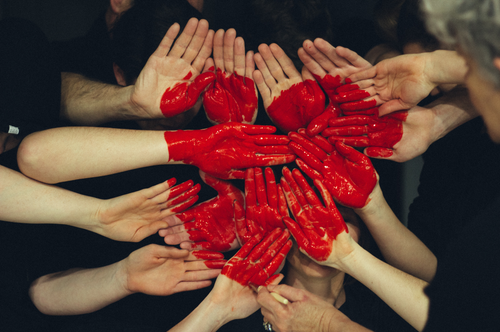 Everyone yearns for a community where loving relationships flourish, for such is our other home. And yet today we witness an epidemic in which the death of love testifies to the abortion of culture as a consequence of desecration our Mother Earth.

Being used loosely in the early 60's and commercialized in the later in that decade, the word love has lost its dignity, meaning, and potential. The word “heart”, which meant to indicate the abode and receptacle of love, has suffered as well. Considered as a seat of emotion in the West, traditional cultures honor it as the realm of intuition and intellect as well, since the most worthy thoughts emerge not from the head, but from a deeper realm, the heart.

Symbolic of the central point of mortal life, from where blood is dispensed to all of the body and the place it returns thereafter, the heart is emblematic of the inner presence of God and His kingdom, as well as the jiva and his awareness.

As the first part of the body to indicate life symptoms, as well as the signs of death when it has stopped, it sets a standard of commitment expressed as “with one's whole heart”, referring to relationships which endure till ones dying breath and even beyond.

Furthermore the heart indicates a secret and confidential realm where spirit is infused into matter. And amongst friends, guides, and all who give counsel, opening the heart is the means to access that sacred space where the Divine serves as counselor, interacting in the lives of those who come together to discern His will and movements.

As we encourage one another to cultivate awareness and follow without fear the dictates of the spirit, the confidential space we call the heart expands to make room for true communion, from which love can be restored and community revived.