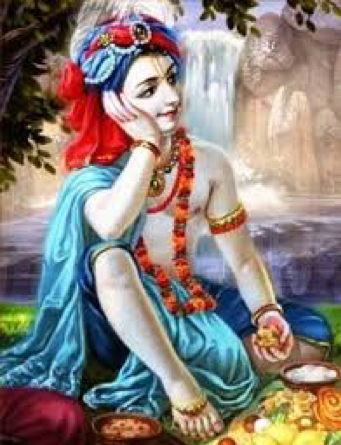 The appearance of Vasudeva, the Supreme Personality of Godhead as revealed to Devaki, offers the answer to all sectarian differences and varieties of iconography related to the Divine. His appearance is possible when the channels of aural reception are opened by humility and submission to the bona ide representative of the Lord. Only then will the Holy Name and lila of Krishna enter into the kingdom of our hearts.

The lila begins with the appearance of Sankarshan who purifies the environment of the heart by delivering the six archetypal demons (lust, anger, greed, illusion, pride, and envy) and establishes the lotus seat for Krishna’s birth. With the awakening of our infant Krishna consciousness in the heart, our senses become purified and spiritualized. Thus, the defects that obscure a perfect understanding of self, God, and the relationship between us give way to the divine revelation of Vasudeva as He appears in our hearts.

After the conditioned soul surrenders to the bona ide spiritual master, however, these defects no longer present an obstacle to the rendering of pure devotional service which, by its very nature, imparts the knowledge sought after by sincere scientists and scholars. The seriously inquisitive student or sage, well equipped with knowledge and detachment, realizes that Absolute Truth by rendering devotional service in terms of what he has heard from the Vedānta-śruti. The Absolute Truth is realized in full by the process of devotional service to the Lord, Vāsudeva, or the Personality of Godhead, who is