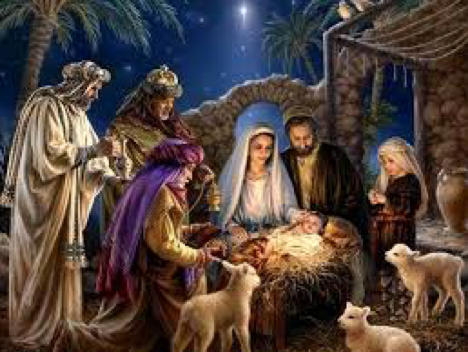 "Srila Prabhupada writes, “A Vaishnava should follow the example of such Vaishnavas as Haridas Thakura, Nityananda Prabhu and also Lord Jesus Christ.” SB 4:6:47. The Bhavisya Purana, Chapter 19, describes an encounter between Jesus and the Aryan King Salivahana. The king saw an auspicious man with a golden complexion and white clothes, living on a mountain. Upon inquiry, the man informed the king, “I am Isha Putra, the Son of God. I am born of a virgin. ”

After identifying himself, Jesus explained the reason for his advent. His purpose is to preach the eternal principles of religion to the mlecchas via their own faith. The eternal principles Jesus established are purification of the mind by two means. The prime method of purification is chanting the Holy Name. The complementary aspect is proper conduct which includes truthfulness, meditation, mental harmony, and following prescribed rules and regulations.

Srila Prabhupada confirms that Jesus is a saktyavesa-avatar. “The Sanskrit word “avatara” literally means “he who descends”. One who descends from the spiritual universe into the material universe through his own will is called an avatara. Sometimes Sri Krishna descends Himself, and sometimes He sends His representative. The major religions of the world—Christianity, Hinduism, Buddhism and Islam—believe in some supreme authority or personality coming down from the kingdom of God. In the Christian religion, Jesus Christ claimed to be the son of God and to be coming from the kingdom of God to reclaim conditioned souls. As followers of Bhagavad-gita, we admit this claim to be true.” Raja Vidya, Chapter 6

As for Jesus, he is the soul of forgiveness. We see this quality confirmed when the devil confronted Martin Luther. Martin had a habit of over-endeavoring to win God’s favor and a tendency to beat himself up for his many sins and shortcomings. The devil took advantage of Martin’s weaknesses and tempted him into total despair by recording these defects on a scroll and reading them aloud.

Martin met the devil’s challenge with character and faith, simply asking the devil repeatedly, “Are you finished?”

Martin waited to hear the conclusion of the devil’s accusations, but the devil never reached the end. Martin confessed, “My sins are many and my transgressions are infinite. There dwells no good within my heart. But now I deliver the final word from your endless list of accusations.”

Martin then quoted the Biblical verse, 1 John 1:17, which assures that Jesus forgives all our sins on the condition that we repent appropriately and thereafter follow his instructions. In that verse, Martin found peace and the devil no longer had any advantage over him.

This lesson applies to the sincere disciples and followers of Srila Prabhupada as well. When the Holy Name comes into our lives, the darkness within our own hearts (anarthas) comes to the surface and the deficiencies we were previously able to hide become exposed. And those anarthas may very well react and retaliate.

For the influence of anarthas to end, we must enlist guru’s assistance to pull them up by the root, exposing them to the light of confession to a qualified guide whose discretion and confidentiality we trust. “Sin” means we missed the mark, and “repentance” means to re-aim with contrition. In sincere prayer, we acknowledge our dependence on higher powers and beg their forgiveness and assistance in chanting the Holy Name with humility and focus. Thus the answer to our sincere prayers will be a state of grace and innocence in preparation for our return back home, back to Godhead."