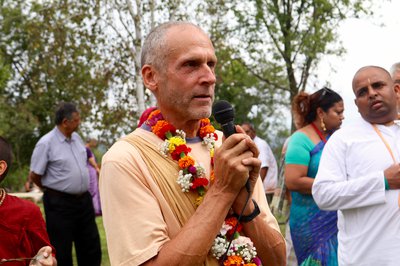 Varsana Swami was born in 1950 in Morristown, New Jersey. From childhood, he was deeply drawn to the workings of the natural world. He became a vegetarian of his own accord at the age of seven and was determined to lead a life of compassion. As a young man, his search for meaning manifested in studying theology in college, visiting ashrams, and hearing from different gurus.

Finally, in 1972 he had the great fortune of meeting his beloved spiritual master, Srila Prabhupada. That encounter had such a profound impact on him that he was inspired to join the Brooklyn temple. Shortly thereafter he went to New Vrindaban and began what is now over four decades of devotional service.

Maharaja has performed a variety of seva over the years that includes raising and training draft animals for farm work; pujari service; conservation work; and heading up the excavation department, which is responsible for literally carving out the infrastructure and holy places of New Vrindaban.

Currently he is continuing his conservation work and is actively developing the lila-sthanas in New Vrindaban, focusing on the establishment of the Govardhan Parikrama. This is being done in conjunction with Dham Seva (a nonprofit organization dedicated to Srila Prabhupada’s desire that the holy places of Vraja appear in New Vrindaban). When not serving in New Vrindaban, Varsana Swami travels as an advocate and dedicated supporter of the farm movement within ISKCON. Varsana Swami is the author of the book Sri Gaura Lila and Appreciating New Vrindaban Dhama .