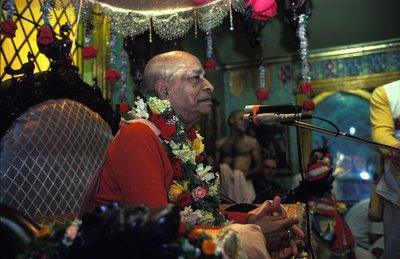 Some excerpts from Srila Prabhuapda’s letters on New Vrindaban

“New Vrindaban should be taken up very seriously because actually I want to develop a replica of Old Vrindaban. I have got ambition to construct there 7 temples as follows: 1. Radha Madan Mohan, 2. Radha Govinda, 3. Radha Gopinatha, 4. Radha Damodara, 5. Radha Raman, 6. Radha Gokulananda, 7. Radha Syamasundara. The whole modern city of Vrindaban was established originally with these temples, started by different Gosvamis. And later on, many kings and princes started their own temples and thus the present Vrindaban is now full with small and big 5000 temples. We have to make such scheme in our New Vrindaban, gradually expanding to an area of one mile long and one mile broad.”

“Vrindaban conception is a transcendental village, without any botheration of the modern industrial atmosphere. My idea of developing New Vrindaban is to create an atmosphere of spiritual life where people in bona fide order of social division, namely, Brahmacaris, Grhasthas, Vanaprastha, Sannyasis, or specifically Brahmacaris and Sannyasis, and Vanaprasthas, will live there independently, completely depending on agricultural produce and milk from the cows.

The life should be simplified without being hampered by laboring day and night for economic development, without any spiritual understanding. The New Vrindaban idea is that persons who live there will accept the bare necessities of life to maintain the body and soul together and the major part of time should be engaged in development of Krishna Consciousness. The whole Vedic principle is to develop Krishna Consciousness, without creating much botheration for the program of sense gratification.

“Now I am hopeful that our New Vrindaban will be an exact replica of Vrindavan in India. I think it was ordained by Krishna that you went there, took your Sannyasa order of life in the presence of Rupa Goswami and Jiva Goswami, and now you have got the opportunity to execute their will…

Therefore, I may once more request you to try your best to construct New Vrindaban an exact duplicate of Vrindaban, and that will give me the highest pleasure…

“Now we are in Radha-Damodara Temple staying, and the program of speaking morning and evening in the courtyard is going on very nicely. It is the same peaceful atmosphere as your New Vrindaban, and just as in New Vrindaban everyone present is devotee. Actually, everywhere wherever Krishna is being glorified, that is Vrindavan…

Regarding your questions, try to finish the temples in New Vrindaban as quickly as possible using whatever materials you have. Later on they can be improved more and more and eventually they will be the first-class opulent temples in the world.

“This modern civilization is always artificial. You are actually learning in New Vrindaban the self-sufficient mode of living, simple living, high thinking, that is our policy, and as long as Krishna remains in the center of all these activities, then you are actually in Vrindavan.

“Yes! Go on acquiring the surrounding lands and in this way we will establish a local self governing village and show all the world a practical example of spiritual life as Krishna Himself exhibited in Vrindavan. Agriculture and protecting the cow, this is the main business of the residents of Vrindavan, and above all simply loving Krishna. The cows, the trees, the cowherd men and Gopis, their chief engagement was loving Krishna, and in New Vrindaban we want to create this atmosphere and thereby show the whole world how practical and sublime our movement is.”