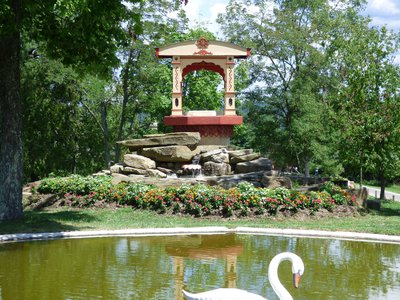 To award a voice to the Dham and her subjects so as to promote and facilitate the cultivation of relationships between pilgrims, the holy Dham, and her residents.

To facilitate the gathering of pilgrims for the purpose of hearing and discussing theology and pastimes to better understand the significance and blessings of the holy places.

Nestled in a wooded hilltops, adjacent to Srila Prabhupada’s Palace of Gold and New Vrindaban community, is a tirtha developed by His Holiness Varsana Swami known as Govardhan Hill. Located on land that was once filled with thorns, it is now a shrine of Kundeshwara Mahadeva, beautiful replicas of Radha and Shyama Kundas, Lalita-kunda and more.

Imbibing the instructions of Srila Prabhupada, His Holiness Varsana Swami has been carving out landscapes throughout New Vrindaban since 1972. His heart is vested in seeing and revealing the glory and beauty of the Dhama thus he founded

Following the order of Lord Caitanya, the Six Goswamis of Vrindavan under-went great sacrifices to establish temples and holy tirthas commemorating the places where Lord Krishna performed His pastimes. Srila Prabhupada brought Lord Caitanyas mission to the West. He desired to have a replica of Vrindavan as a place of pilgrimage in America, which would offer a substantial contribution to his mission.

Now I am hopeful that our New Vrindavan will be an exact replica of Vrindaban in India.
Srila Prabhupada letter, 18 February 1970

I understand the spot is very beautiful and the hills may be renamed as New Govardhana. And if there are lakes, they can be renamed as Syamakunda and Radhakunda.
Srila Prabhupada letter, 14 June 1968

Therefore, I may once more request you to try your best to construct New Vrindabn as an exact duplicate of Vrindavana and that will give me the highest pleasure
Srila Prabhupada letter, 18 February 1970